The issue with most barge unloading dredging equipment is sanding up when faced with drier materials or coarse materials that include rocks and other heavy aggregates.

Operators try to avoid sanding up by adding more water to the dredged materials, adding more bulk and leading to additional time to move and dewater, reducing capacity in the name of avoiding downtime and difficult manual intervention. 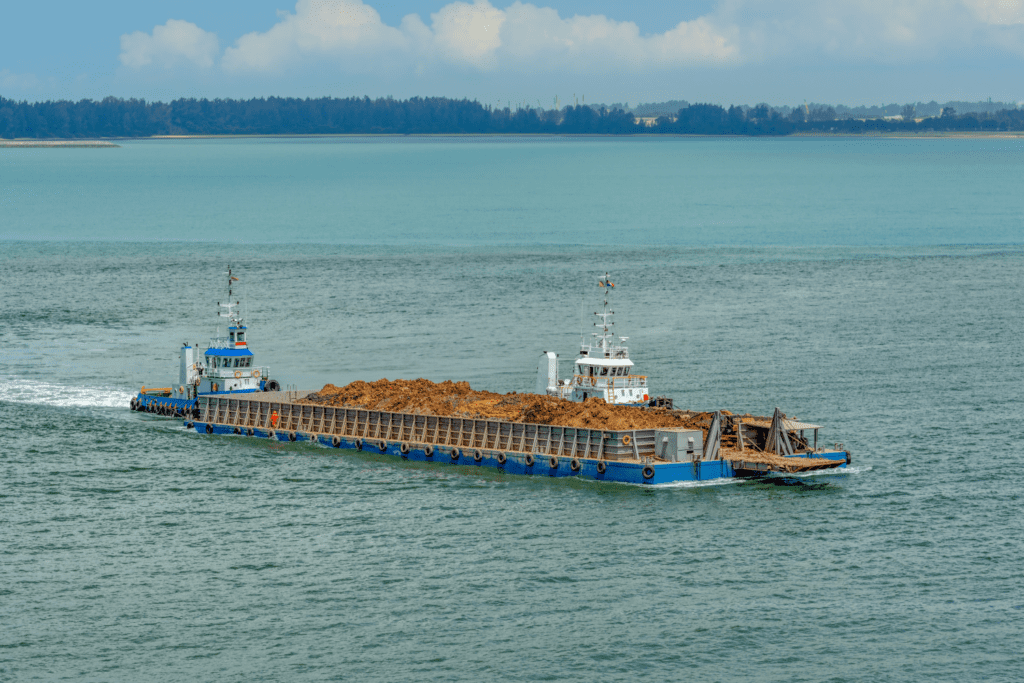 Our dredge barge unloading equipment uses a pump that features a rotary head inside of the pump body that pushes materials out as it spins as well as breaks up materials. This allows the body of the pump to digest and pumps easily dense aggregates.
This is different then centrifugal pumps that are skinny and prone to failure when materials are not wet enough.  If you are tired of adding more and more water to extend the life of your pumps, our dredgers and pumps are what you are looking for to solve this problem.  Our pumps have been in use by the dredging industry for 25 years.

Our dredging equipment is used for emptying loaded barges either by crane with the cutter dredger hanging or by suction dredgers or by bucket ladder dredgers and cranes. The barge-unloading dredger is a stationary special suction dredger anchored by spuds near the shore, where the water depth is enough for the loading barges to come alongside the dredger. The water for the unloading and the transport is supplied into the barge by a jet.

Non-self-unloading barges need to be unloaded either mechanically or hydraulically. Mechanical unloading can be done with a grab, backhoe, excavating wheel or bucket elevator. Non-self unloading barges are therefore often called elevator barges.
Hydraulic unloading can be done using a shore pump discharge system, usually installed in trailing suction hopper dredgers or by means of a barge unloading suction dredger.
The barge unloading suction dredger has to fulfill in principal two functions: 1. the material in the barges must be diluted such that a mixture develops that can be sucked up in high concentrations. 2. the dredge pumps in the dredger have to take care that the sucked up material can be pumped to the reclamation area with enough velocity and production.
Transport distance gives requirements for the installed dredge pump power and the necessity for the installation of one or more pumps.
The maximum concentration that can be sucked depends on many factors, like: • the breaching behavior of the soil. • the design of the suction mouth in comparison with the width of the barge. • the maximum mixture forming that can be reached with the water nozzles and the jets at the suction mouth and the flow rate of the jet pump. • the height of the suction pipeline. Because the maximum under pressure is created here, it determines for a large part the maximum concentration. As a value, a concentration of 1400 kg/m3 is maintained.
Barge unloading dredgers are used for emptying loaded barges either by suction dredgers or by bucket ladder dredgers and cranes. The barge-unloading dredger is a stationary special suction dredger anchored by spuds near the shore, where the water depth is sufficient for the loading barges to come alongside the dredger. The water for the unloading and the transport is supplied into the barge by a jet.
The Cutter Suction Dredger is a stationary dredger equipped with a cutter device (cutter head) which excavates the soil before it is sucked up by the flow of the dredge pump(s).
The spoil is mostly hydraulically transported via pipeline,