The Three Phases of Fly Ash Cleanup Leading to Revitalization of the Wetlands, Embayments and Emory River

This is the story of ecological revitalization at the Tennessee Valley Authority (TVA) Kingston Fossil Plant Fly Ash site in Roane County, Tennessee. Proactive responses to a catastrophic spill have recovered hundreds of acres of habitat for ecological and recreational use.

On December 22, 2008, a dike containing about 20 million cubic yards of coal ash from TVA’s power plant operations failed at the site. The release of material – about 5.4 million cubic yards of bottom ash and fly ash – created a wave of water and ash that choked the adjacent Emory River, disrupted electrical power, ruptured a natural gas line and water line, and covered a railway and local roadways.

The cleanup process ensured that consideration of the revitalization and reuse of the site and the surrounding area were an integral part of all response activities. 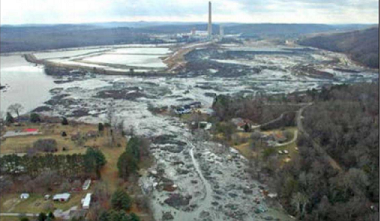 What is Coal Ash?

Phase 1 cleanup began in August 2009, with a time critical removal action. It involved mechanical excavation, hydraulic dredging, rapid materials handling and disposal of 3.5 million cubic yards of ash from the Emory River. This removal alleviated upstream flooding and mitigated downstream ash transport. TVA dewatered ash removed from the river on site and loaded it onto rail cars for disposal at the Arrowhead Landfill in Perry County, Alabama. TVA completed ash removal under the time-critical phase in May 2010, which coincided with reopening of the Emory River for navigation and recreation. Railroad transportation and off-site ash disposal efforts took place throughout the cleanup and finished in December 2010.

Phase 2 involved mechanical excavation of about 2.3 million cubic yards of ash in the north and middle Swan Pond Embayment’s. Recovered ash was dried to optimum moisture content, spread into thin lifts and compacted on site in a 240-acre disposal cell. The disposal cell was re-engineered with a 12-mile subsurface stabilization slurry wall. It is the largest slurry wall in the United States. Most Phase 2 activities were finished by December 2014

Long-term monitoring began in 2013. The goal was to determine the need for additional actions to address any residual contamination in the Emory River. Five years after the spill, monitoring data showed that river ecology was already returning to baseline conditions. Annual monitoring of the river system will continue for up to 30 years to confirm that risks associated with the residual ash remains low and that ash-related concentrations of metals decline with time. Groundwater monitoring and maintenance of the on-site coal ash disposal cell will also be conducted over the long term. A local fish advisory is in place in because of contamination from nearby past industrial operations.

The cutter-head mixes the Fly Ash and brings it into the pump where it is pumped to your slurry dewatering system or geo-textile tubes.

Our self-priming solids and slurry pump easily handles the abrasive nature of bottom and fly ash.

One method of dewatering is Geo-Textile Tubes.  The water will filter out through the material where you can capture the water for treatment and then you can release the water once cleaned.

Fly Ash is watered down when initially put into the slurry pond.  Also during the dredging process Fly Ash gets watered down again to keep it from blowing away.  As the Fly Ash is dewatered heavy metals leach out and need to be processed through industrial water filtration systems.  We offer those systems and consulting on how they fit into your project.  You cannot dispose of the contaminated water without treatment to bring it to minimum EPA standards.