What is coal ash and how does it threaten public health and the environment?

What is coal ash and how does it threaten public health and the environment?

“Coal ash” is the generic term for wastes that are leftover after coal is burned in electric generating plants or industrial boilers. More specifically known as coal combustion wastes or residuals, they include fly ash, bottom ash, flue gas desulfurization (scrubber) sludge, and boiler slag.2 Over 109 million tons were generated in the U.S. in 2012, down from 130 million tons in 2011. The amount of coal ash generated is more than three times the annual amount of hazardous waste generated in the U.S.

After combustion occurs, coal ash is collected from a combustion boiler, and/or the control equipment used to reduce air emissions from coal-burning, and transported to a disposal facility. This transport may be by truck or through pipes or other conveyances after the ash is mixed with water, known as “sluicing.”

Surface impoundments (ponds or lagoons) and landfills are the most common disposal facilities for coal ash. Coal ash is also disposed in surface coal mines or other types of mines.

Coal ash is disposed of in landfills constructed for the purpose of receiving coal combustion wastes, or in a landfill that accepts a variety of wastes such as a municipal solid waste (MSW) landfill. Landfills must be covered with a soil layer or other cover material in order to reduce windblown dust and water mixing with the wastes. However, for at least one ash landfill in Indiana, the Indiana Department of Environmental Management granted a variance from the daily cover requirement.

Coal ash is also disposed in surface coal mines after mining has been completed. The ash is dumped in mined areas and later covered when mine reclamation occurs. There is no requirement to isolate the coal ash from the water table that forms in the coal ash as groundwater resaturates surface mined areas during and after reclamation. 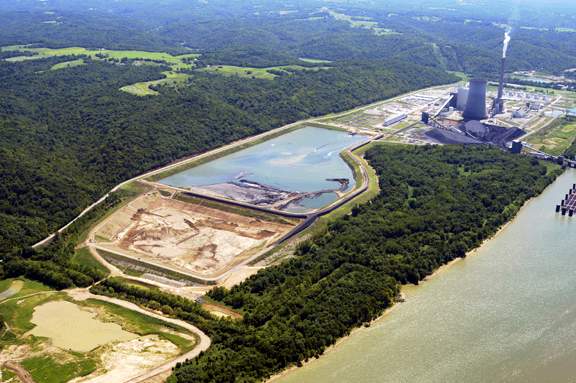 Coal deposits naturally contain trace elements including metals such as arsenic, selenium, lead, mercury, and chromium. When the coal is burned, many of the trace elements remain in the ash and are susceptible to leaching — the process by which toxic materials in coal ash dissolve in water and percolate through the earth. The dissolved toxins, called “leachate,” can endanger public health and the environment by contaminating surface water or groundwater used for drinking supplies.

The pathways for coal ash to reach humans include:

An EPA study of the human health risks from coal ash found that people who are exposed to coal ash contaminants from drinking well water contaminated by leachate from an unlined pond where coal ash is disposed along with other coal wastes, have a 1 in 50 chance of getting cancer from arsenic in their drinking water – a risk that is 2,000 times greater than the EPA’s goal of reducing cancer risk to no more than 1 in 100,000 excess cancer cases.

Coal ash is expected to become more hazardous as new air pollution control regulations go into effect. For example, the U.S. EPA’s Mercury and Air Toxics Standards for Power Plants (MATS) will require new pollution controls on power plants to reduce mercury and other toxic missions released into the air. Air pollution controls do not eliminate mercury, lead and other pollutants, but rather transfer the pollution to the land and water. These toxins will end up in a power plant’s waste stream that is disposed of in surface impoundments and
landfills. 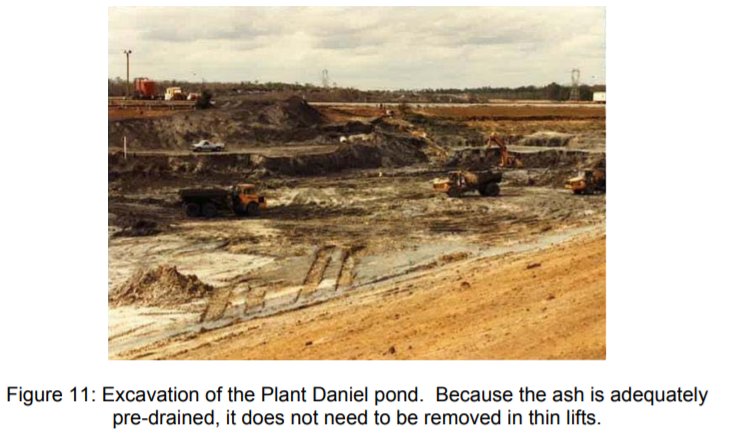 Coal ash is exempt from federal regulation as a hazardous waste, pursuant to two separate U.S. EPA regulatory determinations. But due to
mounting evidence of the health and environmental threats posed by poor coal ash disposal practices, the EPA in June 2010 proposed
two options for a new federal rule to regulate coal ash disposal in landfills and surface impoundments. This rule has not been finalized,
but the EPA has agreed to complete it by December 19, 2014. The absence of federal rules has left coal ash regulation to the states,
which in most cases has resulted in minimal disposal standards that have not prevented groundwater contamination or catastrophic spills.
There are 208 cases, in 37 states, of known groundwater contamination and surface water spills throughout the country. The serious risks of poorly regulated coal ash disposal received widespread public attention in December 2008 when a dam failed at the Tennessee Valley Authority’s Kingston power plant, releasing 1 billion gallons of coal ash sludge into the Emory River.

The most recent major coal ash spill occurred in North Carolina in February 2014. Roughly 39,000 tons of coal ash spilled into the Dan River when a stormwater pipe underneath coal ash ponds at Duke Energy’s Dan River power plant failed, allowing the ash sludge to drain into the pipe and then to the river.

At Duke Energy’s Wabash River power plant near Terre Haute, a seven-foot diameter corrugated metal pipe runs beneath one of the power plant’s coal ash ponds. This is the same type of pipe that failed at Duke Energy’s Dan River plant.

Three main pathways exist for the release of coal ash or its contaminants to humans and the environment:

1. Coal ash and its constituents pose a health hazard through inhalation as airborne particles.

2. Coal ash and ash pond wastewater are directly released to surface water, through overflows or dam/levee
breaches potentially resulting in contaminated fish that are consumed by humans.

3. Leachate from coal ash in unlined ponds can infiltrate groundwater that is used as drinking water.

The U.S. Geological Survey maintains a stream gauge on the West Fork White River across from the Harding Street Station. Flood stage at this gauge is 673.4 feet.79 The record flood level (1913) at this location was nearly 29 feet above the gauge, an elevation of 692.3 feet, 80 above the levee heights of all but one of the Harding Street ash ponds.

Concerns about water pollution are compounded by the loose sand and gravel soils underneath the ash ponds. The Harding Street Station coal ash ponds are constructed directly above the shallow sand and gravel aquifer that adjoins the White River, spreading as far as two miles from each bank of the river. According to IPL, “the ponds were created by berms constructed of native site soils including clay and sand and ash.” Pond 2 has a geosynthetic clay liner, but there are no other linings or engineering treatments to control or collect leachate from the ash stored in the other seven ponds.89 The White River Outwash Aquifer System, over which the Harding Street Station power plant and coal ash ponds are located, is “highly susceptible to surface contamination where sand and gravel deposits are near the surface and have little or no clay deposits.” Well records for this area reveal that clay deposits above the aquifer, which include sandy clays, diminish in thickness as they near the river, eventually disappearing completely. Coal ash pond number 2 is located roughly 500 feet from the river, and pond 1 is about 110 feet from Lick Creek. Static water levels (the distance between the ground surface and water level in a well) for wells in the immediate vicinity of the coal ash ponds may be as little as 4 feet; IPL’s own water wells, used for power plant operations, have water levels as little as 9 feet below the surface. Ash Pond 4 was constructed in a former gravel borrow pit, meaning coal ash has apparently been dumped directly in the sand and gravel deposits that are part of the aquifer.

Indiana electric utilities generated 6.6 million tons of coal ash in 2012.30 These wastes are disposed of in surface impoundments, restricted waste landfills (RWS), surface coal mines, or sold for reuse. In 1989, several Indiana electric utilities began dumping their coal ash at active surface coal mines in Southwest Indiana, and by 2003 had disposed of more than seven million tons of coal ash at surface mines. This practice created a great deal of controversy, and led to several failed attempts by the Indiana Natural Resources Commission to adopt new regulations governing this practice.

The most serious damage from coal ash pollution in Indiana occurred in the Town of Pines near Michigan City. For nearly a 20-year period, the Northern Indiana Public Service Company (NIPSCO) dumped over one million tons of coal ash from its Michigan City and Bailly power plants into the Yard 520 Landfill adjacent to the town. More coal ash was used as road surface material and for other fill throughout the town. The coal ash contaminated private water wells, leaving the residents’ drinking water unfit to drink. At least thirty wells were contaminated with hazardous substances such as boron, arsenic, lead, molybdenum, and manganese at levels as high as 118 times the level that federal standards deem safe for drinking water. Over 260 homes and businesses formerly on wells have been connected to municipal water from neighboring Michigan City as a precaution. The contamination in Pines is so severe that virtually the entire town was designated a Superfund site, and is now the target of a clean-up plan.38 NIPSCO, along with the two companies, Ddalt Corp., and Brown, Inc. that owned and operated the Yard 520 landfill, and a waste hauling company, Bulk Transport Corp., have accepted responsibility for clean-up of the contamination in the Town of Pines.