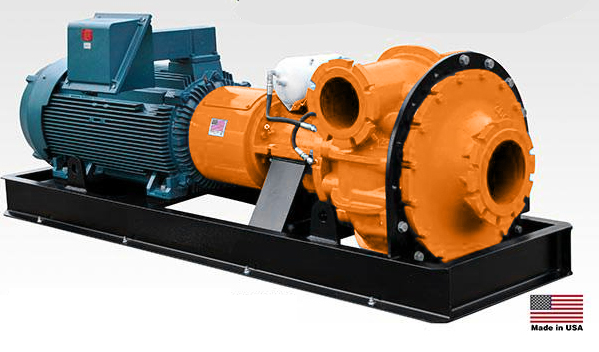 Our Brine Pumps are used on hundreds of U.S. Navy ships with 100% uptime for 10 years, no rebuilds.  The U.S. Navy found our pumps saved the service 17 million dollars resulting in a new contract to buy 50 more of our brine pumps.

Desalination is the process of removing dissolved minerals, which includes but is not limited to salt, from seawater.

The surface of the earth is covered by approximately 30% land and 70% water. Of the water, the vast majority (97%) is salt water, found in oceans. Only 3% of the earth’s water is fresh water, and of this 3% only one third is usable, with the remaining two thirds being locked up in ice and glaciers.

Pumps used for desalination require more stringent material selections and different design considerations than normal applications. The liquid being pumped can be seawater, brackish water, or a concentrated brine. The longevity of the pumps in service depend on their design and the materials used as well as the operating conditions present. Four different pumps related to desalination are discussed. These include vertical wet pit intake pumps, vertical brine recycle pumps, and horizontal pipeline transfer pumps.

Desalination is an important means of providing a sustainable supply of freshwater, and it is therefore one of our key markets in the engineered water segment. Desalination pumps are required to operate in harsh climates 24 hours a day, 365 days a year; they must be highly durable, resistant to corrosion from seawater, and outstanding efficiency to minimize power consumption

The concept of desalination is very old, with references to it being found in ancient Egyptian, Sanskrit, Hebrew, Phoenician and Greek writings. In 1790, the US Secretary of State, Thomas Jefferson, received an offer to sell the government a scheme to convert salt water to fresh water, with the objective of avoiding any deaths at sea. The results of the tender described a simple distillation process. The first desalination units were eventually built for ships. However, they were not for drinking water, but rather to provide fresh boiler water, so that steam ships would not be forced to travel with cargo holds full of water. By World War II, there were hundreds of mobile desalination units in use, and all major vessels were equipped with them.

Key challenges for the pump manufacturer have been increasing water salinity and employing higher grades of materials. Global warming has had a significant impact in the rising seawater temperature and water salinity. This factor has lead to rapid corrosion of the material traditionally used in pumps, creating demand for a superior grade of material and increasing the capital cost of the equipment. The other major factor that can aid in the wider acceptance of desalination is improved life cycle cost of the equipment.